Lesson Reflection: My Day One Lessons 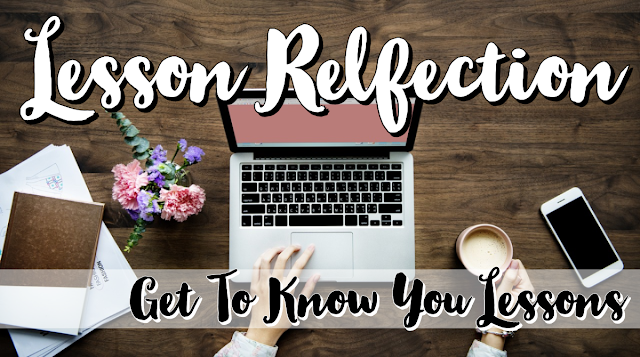 A goal I have set for myself this year is to reflect on lessons daily. I've been trying to think of the best way to talk about the lessons, what worked and what didn't and for now, I am going to try and use my blog as the platform for how I reflect on my lessons. I want to make sure that I document what I do each day and what I need to change and improve for next year.

To start, here is the lesson I did for the first day of school. I wanted the focus to be on building a class culture and getting to know each other while also starting to introduce classroom procedures and expectations. I want to make sure students leave excited to come back the next day.

I had originally planned to do a station rotation of getting to know you games and I would sit at one station and play with the students at that one station, giving me a chance to really talk to them and get to know them but when I looked at my class lists and saw that my class sizes varied significantly, my brain just wasn't ready to sort of the math and grouping for all my classes. I also wasn't sure what tech would be available since it would be my first time with BYOD (Bring Your Own Device) students so I needed to make a plan that could be flexible and could easily change, that is harder to do with stations so I decided we would try doing a series of activities all together as a class.

ACTIVITY 1: WHAT DO THESE PICTURES TELL YOU ABOUT ME?

Students were given a collage of photos of my summer and had to determine 10 things the photos taught them about me. I didn't explain any of the photos. With their randomly assigned groups, they had to create a list to share with the class, this led to discussions and debates about what you could really learn from the photos and helped students learn to work together on something with a low cognitive load. They shared their findings with the class and we talked about the patterns in their responses. Then I spent a few minutes telling them about my summer and they were thrilled when they got things right. 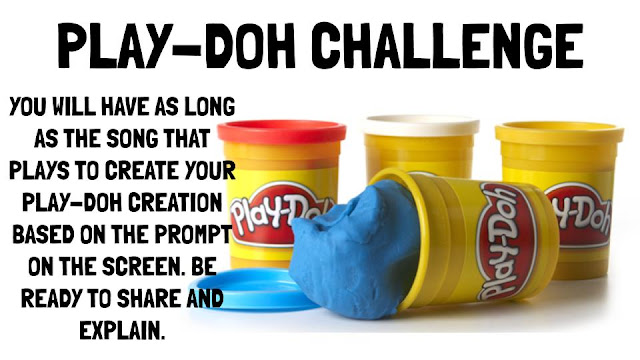 This one is a TLAP strategy that I love. I give the kids each their own thing of Play-Doh and they have to use the Play-Doh to tell the class something about themselves. I do three prompts and for each prompt I embed a music video to act as the timer. As they work, I walk around the room and talk to the students about what they are making and why. I learn so much about my students by doing this and it is such a break from the normal routine of going over the syllabus. There are a ton of variations on this activity, you can find out more here!

I teach on a two-hour block so I have to think of each class as two days. If I saw my students daily, I would want them to know a little bit about my expectations and procedures by day two of my class but I don't want to stand in front of the class on their first day and drone on about my syllabus. So I used Quizizz to introduce the big stuff they need to know about my class to my students, as they went they were told to take their best guess when they got something wrong it told them the correct answer. Once they were all done, I reviewed all the questions and answers with them and took any questions and then they quizzed again and knocked it out of the park. Each day, I'll add more questions to the Quizizz and we will learn more and more about my class by doing this EduProtocol that I use to build academic and content vocabulary throughout the year.

ACTIVITY 4: TWO TRUTHS AND A LIE

Only one class had enough time to play this one and that was because they were my class that was too big to do Jenga (did not have enough Jenga sets or tables for that group.) Again, I mixed them into new groups and they went around stating one thing that was false and two things that were true. The group then had to guess for each person which thing they thought was the lie. I love when get to know you activities start really quiet and erupt into laughter and conversation really quickly like this one did. 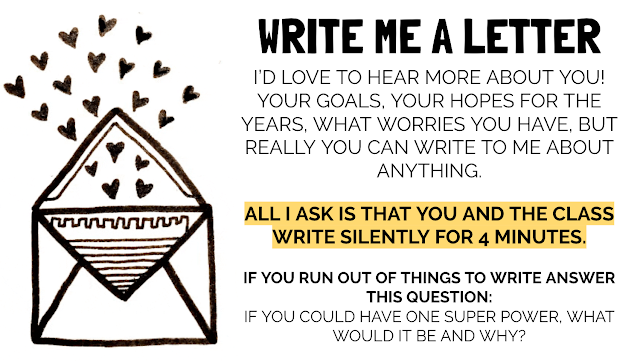 ACTIVITY 5: WRITE ME A LETTER

While I start class with a student survey, I end class with this letter. There are two goals with this activity: get them used to timed writes and learn more about my students. Usually, by the end of class more students are willing to share more details about who they are with me. I make clear it must be silent, independent, and they must write the whole time. I use a timer and when the 4 minutes are up I tell them they can stop there or take a minute to finish their thoughts. I read the letters and write them each a personalized note back that I give them the next time I see them. I learn so much about my students from this short writing activity. 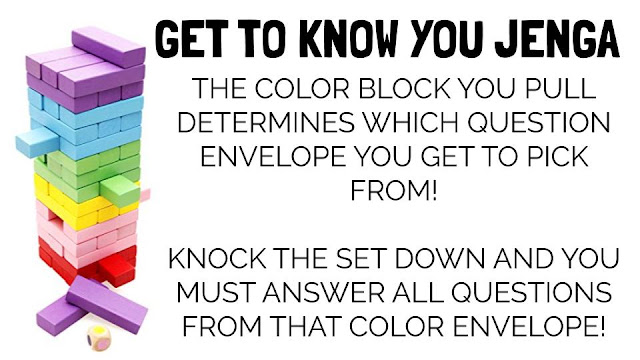 ACTIVITY 6: GET TO KNOW YOU JENGA

Thanks to my colleague Michelle, I was able to get a document of about 120 Get To Know You Questions. I took the questions, printed them, and cut them all up so each question was on its own strip of paper. I put those in sets of envelopes that were color-coded to match the blocks on the Jenga set. The students were put in new groups and they played Jenga as you usually do but whatever color block they pulled they then had to answer a question from the matching envelope.

I was thrilled to see how well this worked with my English Learners, a small modification on the instructions was simple that if someone was struggling to read one of the questions they had to help each other understand. This helped me set the culture right away of how we will speak and read in English but we will also help each other when someone is struggling. I watched groups let the person try and read the whole question and then someone would say "May I help you?" And then they would read the question allowed for the group and make sure everyone understood it, sometimes translating as needed.

HOW DID IT GO?

In the end, I am so glad I did not do stations, this gave me the freedom to walk around the room and talk to students as they played the games. It absolutely would have been easier for me to stay in one spot but I don't think I would have built the same level of rapport I now have with these students. I also had some classes where we did not do everything in the slide deck and I often changed the order based on how the class was doing (Did they need to stay where they were a little longer? Did I need to change the groups again? Did they need something high energy?) While there was not a single class that did every single activity, the most skipped activity was "Two Truths and a Lie" and one class skipped Jenga. Every other activity was done by all classes in some variation.

I would absolutely do this again as my first day. Students were engaged, they left with smiles on their faces, and I believe I achieved my goal of wanting my students to want to come back to class.

Do you have a favorite first-day activity? Share in the comments! 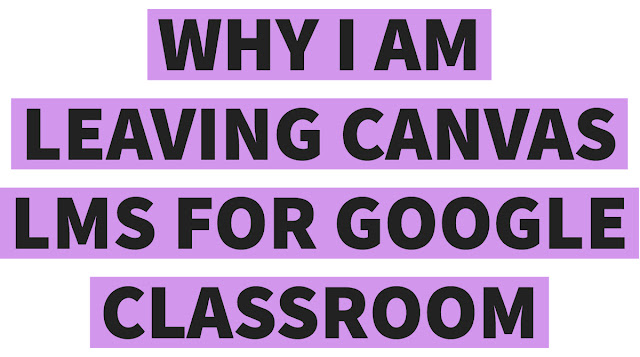 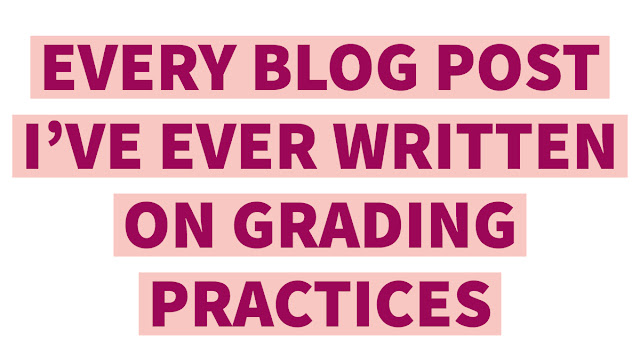 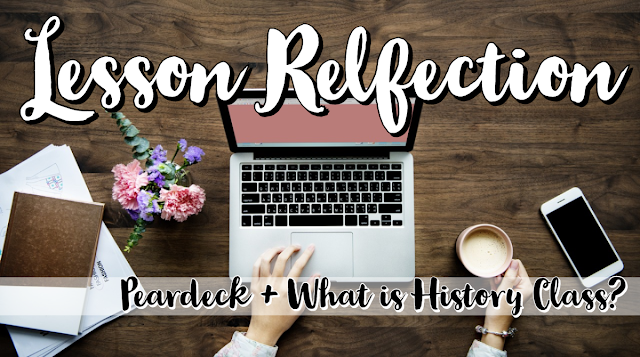 I am a part of a Facebook Group for AP World History teachers that also has a shared Google Drive (that I actually currently manage). It is a collection of amazing resources and one of my favorite lessons that comes from the drive is called "They Thought The Earth Was Flat" by Bill Strickland. It engages students in the common story of Christopher Columbus being one of the few people in the 15th century to believe the earth was round. The students read and analyze a series of 'documents' that seem to support this myth and then shows them the Farnese Atlas which was created in the 2nd century. After a few more pieces of evidence start to poke holes in this longstanding story of Columbus the lesson asks students to consider how historians look for validity in sources and how historians do the work of figuring out our past. I love this lesson because it really introduces what historians do and how messy history can be. It gets students thinking and talking about ho
Read more